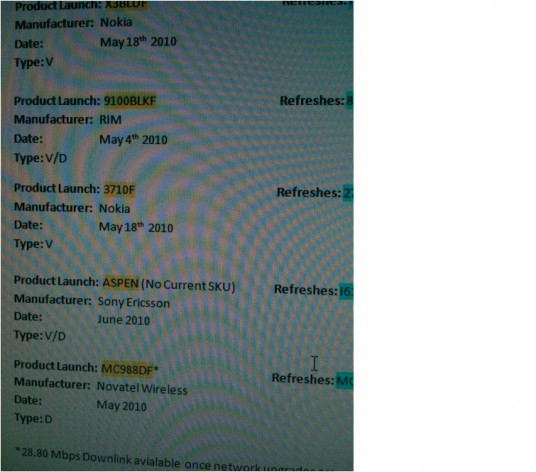 A whole whackload of Fido information has been leaked, giving us a relatively clear picture of what to expect from Rogers’ little brother over the course of the second quarter. The star of the show is the BlackBerry Pearl 9100, which should be available on May 4. The Nokia X3, a 2G portrait slider will go on sale May 18, according to the documents. The Pearl 9100 is a pretty high-end handset, so I think we can expect it to be coming out on Rogers around the same time as Fido. Among the less exciting additions to Fido are the LG GW300 (a low-end candybar with full-QWERTY keyboard, due April 13) the Nokia Fold 3710 (a cheap flip with GPS, landing May 18), and the Sony Ericsson Aspen (an eco-friendly candybar, coming to Fido sometime in June). There’s also going to be an HSPA+ Novatel internet stick and some corresponding mobile broadband plans, if you’re into that kind of thing. Speaking of plans, there’s also going to be a new CarryOver option that will let you use leftover minutes for up to six months.

That’s quite a bit of news for a little carrier like Fido, but signals just the beginning of what will likely be a busy summer in Canadian wireless.

Disguise Your Drinking Addiction as a BlackBerry Addiction with the BevBurry

Here's a great gift idea for that BlackBerry-addicted friend of yours. You know, the one that has his 9700 holstered...