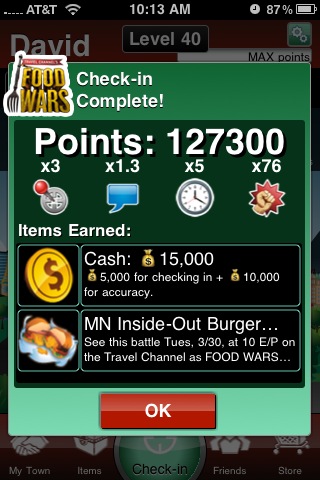 iPhone check-in game MyTown has just partnered with Food Wars, a show on the Travel Channel that pits two dishes in a given city against one another. The gist of the deal is that now you can watch streaming episode trailers of the Food Wars in MyTown, as well as get special items to help you make more money in-game. If you haven’t had a chance to try it, MyTown basically crosses Foursquare with Monopoly – players who check-in at real-world locations can eventually “own” the locale, and earn “rent” from other people who check-in there. The collection of buildings that you own is collectively known as your Town, with tracked value and visitor count. It’s a bit of a shame that MyTown isn’t getting the same amount of fame as Foursquare (or even Gowalla, for that matter), since their numbers are impressive, and their spin on the mobile check-in app is decidedly unique.

On top of the Food Wars promo, version 3.0 of MyTown was released last week, that included some social features, like comparing towns, gifting of in-game items, and viewing recent check-ins. 3.1 is already due to drop sometime next week, and will include some new buildings for their futuristic Weebo theme, along with some other undisclosed features.

In any case, hit up the developer, Booyah!, for more info.