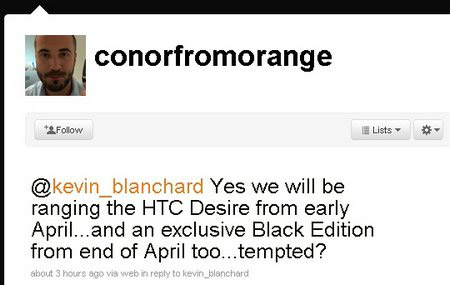 It seems every major mobile operator in the UK will be getting the HTC Desire. T-Mobile already got it, Vodafone is on the list too, and now Orange is joining the party. But the France Telecom-owned operator wants to differentiate its offering from the rest of the pack – they will offer the black Desire, which we’ve seen before, and also the regular silver version. We know this thanks to Orange UK’s Conor Maple who tweeted the news. I would take that as a pretty reliable source. He said the “regular” Desire is coming “from early April” and the black one at the end of the month.

The conference circuit is cooling down and it's getting to be about that time of year when everyone takes a...