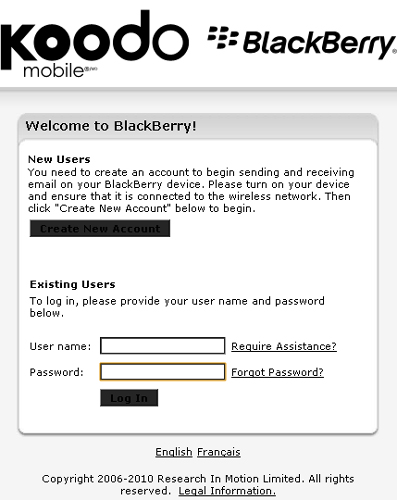 Koodo Mobile will be getting BlackBerry service sometime soon, based on some sharp eyes spotting the active site koodomobile.blackberry.com. Koodo is a wholly-owned subsidiary of Canadian Carrier TELUS, and usually deals with cheap phones and pay-as-you-go, but with the launch of an HSPA network by its parent company, Koodo has the opportunity to bring in a wider range of devices, including smartphones. Which models in particular remain a mystery, but maybe they’ll pick up the old Storm that’s being phased out on the big carriers. Virgin Mobile operates at the same level as Koodo (only they’re owned by Bell), and have been offering BlackBerry service for a little over a year now, Rogers’ Fido brand began selling their own shortly after that. With WIND gaining momentum, and Mobilicity and Public Mobile on the way, it makes sense that all of the Big Three Canadian carriers begin reinforcing their (and their respective sub-brands’) lineups, and making sure everyone has a BlackBerry to offer is entirely sensible. We’ll keep an eye on Koodo for more info regarding an official announcement.