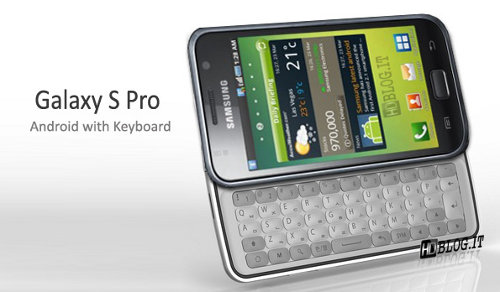 Who doesn’t love a good rumor? Today’s rumor is that Samsung may be working on a keyboard packing Galaxy S.  There’s not much to be said about the device that doesn’t exist besides a badly done mockup of what the Pro version might look like. But it’s enough for us to want one.

The Galaxy S is one hell of a smartphone. It’s 4-inch Super AMLOED display should turn heads, and with it’s superior graphic processing power, it has a lot going on for itself. For some users, though, that might not be enough. Some might want a keyboard. So the Samsung Galaxy S Pro may fit the bill. If it ever materializes, that is. It seems suiting enough to make a Pro version of their device. It would certainly make the decision tough on me if I was going to buy one. And I might.

One very appealing feature of the Galaxy S is that is just so damn thin, measuring at a tiny 9.9mm. With the addition of a keyboard, that could definitely add quite a bit of heft, especially if they make a good keyboard for it. Not to say all smaller keyboards are bad, but with a device like this, you’d want a good keyboard with large keys with a decent amount of travel when pressed, and good spacing in between each other. My must-have for a keyboard packing handset is a dedicated number row. It may be no big deal for some, but I am not a fan of pressing another button to get to a number. It’s a small complaint, but fair enough in my opinion.

So whether or not this Galaxy S Pro will ever exist is anyone’s guess, but let’s hope so! More options means more users not settling.  What would be really nice, though: a HTC EVO with a QWERTY keyboard.

Android hiding in the skin of iPad OS

The iPad is coming! So are the clones. While Apple fanboys will say that all tablets are iClones, this seems...