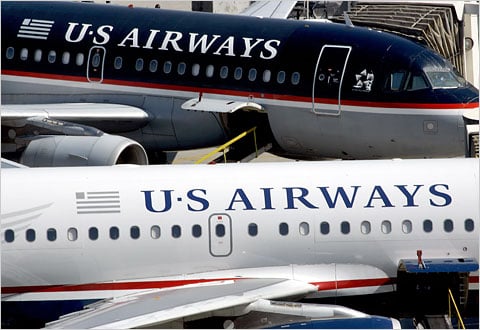 Ask anyone who’s been unfortunate enough to fly US Airways and you’ll likely hear the words “sucks” and “big time” used in conjunction at least a couple times in their subsequent tirade. So, in a bid to make their air travel experience a little less shitty more bearable, the airline has finally caught up to modern times and is bringing in-flight internet to its customers. Over the next few months, US Airways will be outfitting its fleet of Airbus A321’s with Aircell’s Gogo in-flight WiFi systems that will allow jet-setters to hop on the web from 10,000 feet in the air.

US Airways is aiming for June 2010 to complete its Gogo WiFi roll-out. The company plans to have Gogo service fully up and running on all 51 of its A321 jets by June. In the meantime, US Airways will put a WiFi symbol on the exterior of each plane and throughout the cabin to indicate that it has Gogo on board. Once the entire A321 fleet has been Gogo-enabled, US Airways will indicate which planes have in-flight internet connectivity at the time of booking through its website.

As for pricing, expect to pay $4.95 for up to 1.5 hours of web-surfing time, $9.95 for up to 3 hours, and $12.95 for any session longer than 3 hours when using your laptop on a domestic flight. Smartphones and other WiFi-capable mobile devices will be offered up to 1.5 hours of internet for $4.95, and $7.95 for longer domestic flights. The bargain here is obviously the smartphone option.

There are currently a total of five A321 planes in the US Airways fleet that can boast internet connectivity through the Gogo in-flight WiFi service. If you find yourself on one of those planes, and you have a laptop or smartphone handy, US Airways will give you a free internet session. The offer is only good to first-time Gogo users and will only be valid until June 1, 2010. Too bad you have to actually fly US Airways to get that free Gogo session.

A little while back I posted on the launch of an iPhone App for the popular Auto Trader magazine in...