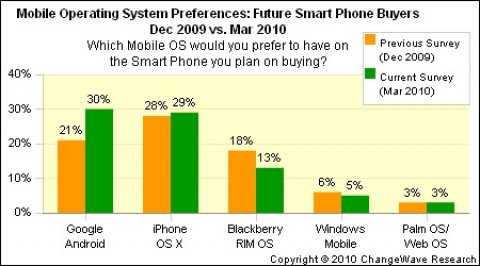 ChangeWave has released an interesting survey, asking people what kind of smartphone they are interested in buying. Now historically, the reigning champion has always been the iPhone, but in the newest survey, although by a very small amount, Android devices are on more minds than the Apple iPhone.

The chart below shows which operating system future smartphone buyers will be seeking out when they go out and purchase a new handset. The chart shows a survey that was taken in December, and the newest survey, taken in March. The only two operating systems that have made gains are Android and iPhone, everything else has dropped down, or hasn’t moved at all. 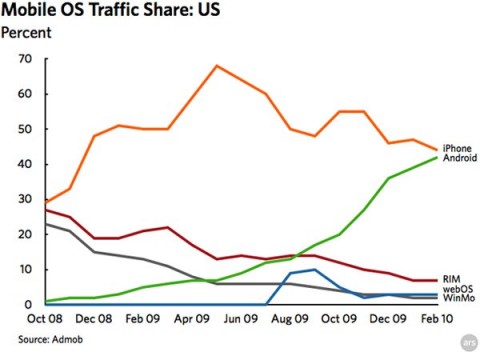 Users considering a WebOS device have not changed since December, stuck at 3%. Windows Mobile has also taken a slight tumble, dropping from 6% in December to 5% in March. Note that it just says Windows Mobile, and not Windows Phone 7, since there are no devices available, it makes sense why it was left out, but I’d bet that the percentage would be significantly higher if WP7 was included. Blackberry is also down from 18% to 13%, but one could imagine that many people will be interested when the mysterious Blackberry slider becomes available.

The real showdown comes down to Android and iPhone. While the iPhone has increased a percent, bringing it to 29%, Android has jumped up 9%, topping off at 30%.  This would be the first time any OS has taken the crown from the iPhone when it comes to potential buyers. While beating the iPhone by only one percent is in essence, nothing,  it just goes to show that the little green robot, love it or hate it, is and will continue to be the iPhone’s biggest threat.

AdMob released their most recent metrics, and it shows that Android users are right below the iPhone with mobile OS traffic. iPhone user traffic fell, and Android is on its way to surpassing it in the near future. That is, until the iPad, and new iPhone come out. But with every iPhone today, there are about six new Android devices coming down the pipes, so this should be very interesting year, indeed.

Evo: no voice and data at the same time

I don't think you could call this utterly shocking, but like the Motorola Droid, the HTC EVO does not support...