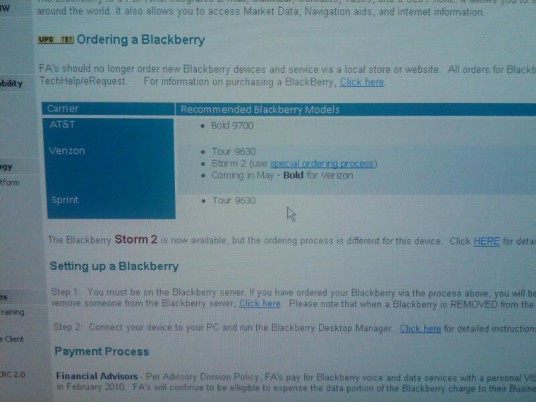 This screenshot from the Bank of America’s internal site shows pretty plainly that Verizon will be releasing a BlackBerry Bold in May, which will most likely be the updated Tour 9650 we’ve been waiting for so very long. This screenshot lines up nicely with earlier rumours which also pointed to a May launch, although it may just be the word of corporate sales rep, so take it with a grain of salt. We can only assume Sprint will be releasing theirs at around the same time. The code-named Essex will be adding a touchpad and Wi-Fi to the existing 3.2 megapixel camera, 256 MB of memory that the first Tour offered. We had heard that it would be getting a branding change, and good thing too – the Tour was basically a Bold anyway, the name was just a petty stab at differentiation from the GSM version.  For those really itching to get it, we’re set to pick up the 9650 up here in Canada around the same time frame.

My bud Bla1ze over at CB noticed this one, and as he correctly points out, it would be nice if...