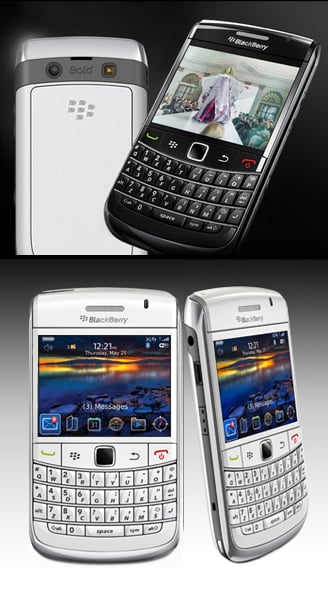 Yesterday, there were rumours that Rogers would be getting the BlackBerry Bold 9700 in a white paint job, but had little more than an telling SKU to back it up. Luckily, someone has spotted the white Bold right on RIM’s front page… for Thailand. That doesn’t tell us who else in North America will be getting the option of a white 9700, or when, but those who are in Thailand can pick up the BlackBerry Bold from a variety of carriers – just keep in mind that none of them are showing off the new colour, so its availability is still somewhat in question. If you’re in a rush, the older BlackBerry Bold 9000 has been available in white for awhile, as has the Curve 8520, and Pearl Flip 8230.

There were rumours that the Curve 8900 would come out in white, but that never seemed to happen – ah well, you can always get a ColorWare job. In any case, the 9700 looks pretty close to my mockup, eh?

BlackBerry Bold Coming to Verizon in May?

This screenshot from the Bank of America's internal site shows pretty plainly that Verizon will be releasing a BlackBerry Bold...