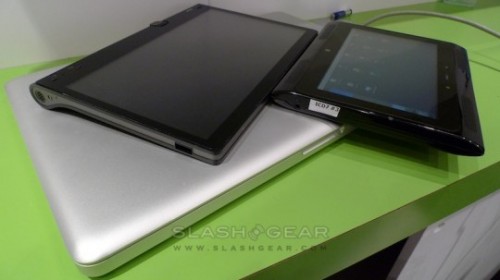 Please excuse my blasphemy, as it’s the week of the iPad, but sonofabitch. While many of you are probably getting your dusty CareBear sleeping bag out to wait outside of the Apple store on the 3rd, many people are taking a pass on the iPad in favor of something more functional (and geeky). Looks like those people, including myself, will have to wait even longer. Due to “serious issues” with the Nvidia Tegra chipset, Notion Ink’s Adam, as well as a couple other tablets will be delayed.

New target date for the Tegra 2 tablets? Not before August 2010. The Adam (decent spec run down of the Adam can be found here), Vega, and Ultra tablets will have to wait a while to get to market.  While all of the tablets are very nice, I’m pretty bummed out about the Adam, as it looks like one of the most powerful tablets that will be around this year.

Not only is the the Tegra 2 chipset making problems, but there are a few factors. A combination of hardware, and technical software issue, as well as stability and Flash round out the rest of the issues. Most issues are with the Tegra 2, and manufacturers are waiting for Nvidia to do something about it.  If you just can’t wait, and you need a tablet in the near future, just go and get an iPad. For those who still don’t want an iPad, and possibly something Android-based, get an iPad anyway, and then sell it when the Tegra 2 tablets become available.

Some more tech-savvy people may not see too much need for a tablet, since you probably utilize your smartphone and your computer in ways the average consumer never will. The main draw for myself as why I want an Android-based tablet is the hacking and rooting aspect, but do I feel like I need one? Hardly. If I was concerned about number of apps, and overall user experience, I’d have pre-ordered my iPad as soon as the option become available.

Anyone looking forward to any of the delayed tablets, or iPad all the way?

Take a look at these NVIDIA Tegra2-powered Android tablet prototypes to see what you’re missing out on!

[Update]
We went directly to the source and checked with NVIDIA regarding this rumor about Tegra2 problems delaying Android-based tablet launches. NVIDIA says the rumors are completely false and that Tegra2 is already shipping to manufacturers and on track for scheduled launches. According to NVIDIA:

The rumors aren’t true. Everything’s on track. We’re shipping products to customers, and they’ll release them when complete. Expect product announcements in the next few months.

Apple has published a list of iPad-ready websites and it includes some heavy hitters that could help Apple win its...