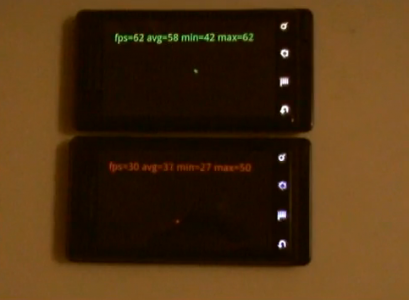 Are you a Motorola Droid owner who has recently updated to Android 2.1, through the OTA or manually? Notice any differences? Any lag here or there? Well, after what seemed like forever, Verizon recently began the roll-out to Android 2.1 on the Motorola Droid, after a couple delays.  Unfortunately, the update may have caused you to answer “yes” to the above questions. It looks like the 2.1 update for the Motorola Droid has lowered the graphics processing performance on the device. Though people say they have not noticed much, if any drop in performance, the numbers between the updated, and not updated Droid differ quite a bit.

There is an application to test your graphics on your Motorola Droid, we suggest you give it a try, and leave some feedback. What’s interesting about the picture above is that the Droid on the top is running the max fps, while the updated is only running 30 fps, with the max being 50.  I’m not anywhere near an expert but it makes me wonder what the devices were doing (what apps were running) to get those numbers. Who knows, maybe the non-updated Droid always ran at the max fps? Let’s hope the decrease in graphics processing could possibly help increase the battery life of all updated Motorola Droid phones out there.

In our testing with the Droid we found it ranged from 31-56 FPS, avg 32, min 12, and max 58. Now that’s quite a range, but we saw no noticeable differences in overall system performance. That being said, your results may differ. The guys over at Android Central got about 40-41 FPS in their testing, so it may depend on what you’d been doing with the device prior. In any case, give the test app a try, and tells us what you’re getting. If you play any graphic intensive games on your Droid, has performance dropped at all?

A few weeks after its successful iPhone app, the good folks at Digg have released a native Android app of...