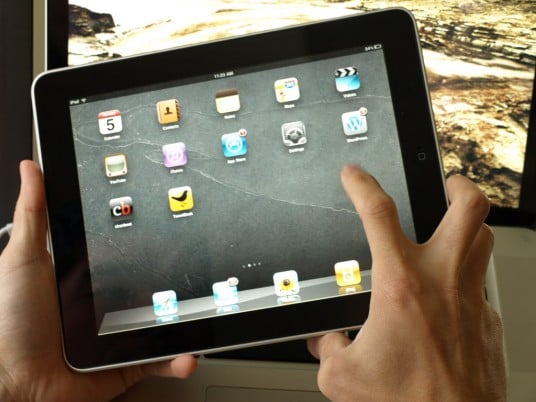 This past weekend, in case you somehow haven’t heard, was Apple’s iPad launch weekend. It was the weekend that Apple unleashed their new tablet on the world, and in the process, sparking hundreds of thousands of iPad purchases from eager-beaver Apple fans. So, just how many iPad units did Apple sell? According to Apple themselves, they saw something like 300,000 iPads sold on Saturday – iPad launch day – alone! The number falls short of analyst estimates that turned out to be woefully inaccurate, but is still impressive.

Launch day sales numbers are a big indicator of just how successful a product launch proved to be. That’s part of the reason analysts like Piper Jaffray’s Gene Munster clamor to be the first to guesstimate initial sales figures. Munster put out a note over the weekend, estimating that up to 700,000 iPads had been sold on Saturday. That turned out to be wrong. Apple says that 300,000 iPads were sold through their online pre-orders, Apple stores and partner sales – basically all iPad sales channels.

This is what Apple chief Steve Jobs had to say on the matter:

It feels great to have the iPad launched into the world—it’s going to be a game changer. iPad users, on average, downloaded more than three apps and close to one book within hours of unpacking their new iPad.

At the time Munster released his sales projection, we said that it’s probably a good idea to take the report with a grain of salt. That turned out to be good advice. We also said that only Apple themselves knew exactly how many iPads flew off store shelves, and that even if they managed to only sell half as many as Munster predicted, the iPad would be consider a tremendous success. The 300K figure that Apple mentions is just about half of the 700K estimate, but, like we said, indicates a launch success!

For a little context, ponder this. The uber-popular iPhone needed 74 days to hit its 1 million units sold milestone (the iPhone 3GS did it in just 3 days, but launched globally). The iPad sold 300K in one day. The iPhone needed a few weeks to hit that kind of sales volume. How do you like them Apples? (sorry, couldn’t resist the pun)

So, is the iPad a success? Initially, sure. In the long-run, we’ll have to wait it out and see how early adopters influence the market. We have a feeling Apple will do just fine with iPad sales…

Check out all our iPad coverage here.

Verizon winks and nods about the HTC Incredible

Oh Verizon, you're such a tease. First, we get indications that the HTC Incredible is already in warehouses. Now, one...