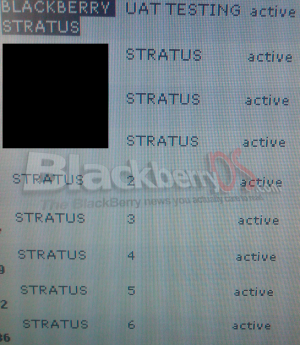 Telus is shaping to pick up the new BlackBerry Pearl 9100 alongside Rogers, according to this screenshot from their testing servers listing 11 devices total, each dubbed Stratus. Now, we still aren’t sure how the Stratus and Striker codenames differ – it’s entirely possible that Telus is picking up the T9 version of the Pearl (9105) that has been spotted recently. There were murmurs earlier that Telus’ version of the new BlackBerry Pearl would be available in both black and pink paint jobs, if you’re interested in remaining fashionable.

The 9100’s form factor, if you haven’t seen it yet, is highly reminiscent of the original Pearl, with the obvious addition of the optical trackpad, but the significant changes are really under the hood. The camera will be upgraded to 3.2 megapixels, device memory kicked up to 256 MB, and OS 5.0 will be included. 3G, GPS and Wi-Fi b/g/n are confirmed, rounding out a fairly solid device that will easily be on par with the new Bold 9700 as far as specs go. You’ll have to sacrifice some screen real estate for the added pocketability, but that’s a sacrifice lots of folks are willing to make.

At this stage, we can apparently expect the the Telus device in 2-5 weeks, which coincides nicely to RIM’s Wireless Enterprise Symposium event, which begins around the end of the month, so our fingers are understandably crossed for an announcement at the show!

Here's an interesting little tidbit that leaked yesterday over at BGR. If you're a Sprint BlackBerry user, this one is...