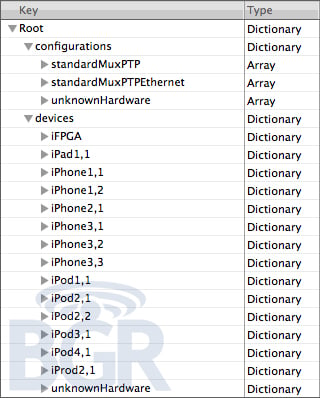 iPad news has been at the fore here at IntoMobile for the past few days, and with good reason. If you didn’t check out Will’s livecast of the iPad launch (he was on-location at the Palo Alto Apple Store), take a few moments and check it out. It was some crazy stuff!

Taking a break from my inbox inundated with iPad press releases, news and pleas for coverage, I noticed a very interesting bit of next-gen iPhone, iPod Touch and iPad news. One of BGR’s contacts took a few moments to dig around the iPad file system, and found some very interesting evidence… Evidence that points towards not only a 4th gen iPhone, but a 4th gen iPod Touch and 2nd gen iPad!

Let’s get started with the iPhone. When it comes to Apple’s filing system nomenclature, they use a number comma number system… With the first number being a major hardware generation, and the second number being a minor iteration. The iPhone 3GS pegged as the number 2. You can clearly see it listed as iPhone2,1 above (the iPhone 3G was 1,2, original iPhone was 1,1 etc.). Now, it looks like an iPhone 3,1 3,2 and 3,3 are listed. Three versions of a next-gen iPhone? Looks that way. Why? I’m not going to speculate, but lets go ahead and attribute one to AT&T, another to Verizon, and a third version to, oh, I don’t know… you fill in the blank 🙂

Next is a clear-cut listing of a 4th gen iPod Touch. ‘iPod4,1’ looks fairly convincing to me.

Finally, and perhaps right up there with the iPhone is what looks to be another iteration of the iPad. At the top of the shot do note iPad 1,1. This is the current gen you have in your hands right now. Down, near the bottom of the list you’ll see ‘iProd2,1’. The iPad was initially listed as ‘iProd1,1’, so, this more-or-less confirms that the next-gen iPad is well and truly under development for next year… I wouldn’t expect to see it anytime sooner than that!

Telus is shaping to pick up the new BlackBerry Pearl 9100 alongside Rogers, according to this screenshot from their testing...