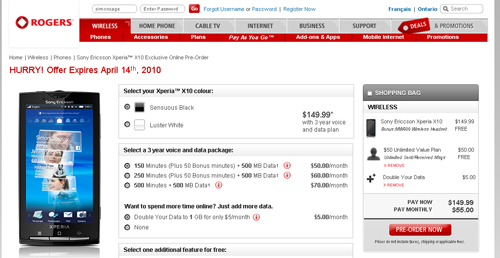 Rogers has long ago announced that they’ll be selling the Sony Ericsson X10, but only today have they opened up the floodgates for preorder. The X10 Xperia is going for rather reasonable price on Rogers: $149.99, on a three-year contract, which lines up perfectly with earlier rumours.

The Xperia X10 will be the beefiest Android phone for at least a little while, with an 8 megapixel camera, 1 Ghz processor, Android 1.6 (but eventually 2.1) loaded with custom Timescape and Mediascape applications. It will be accompanied by some miniaturized X10s at some point soon, for folks looking for something a bit more modest. It might seem like the Sony Ericsson X10 is quickly outclassed by the HTC EVO, but one of the EVO’s primary selling points, WiMAX, is still heavily limited by coverage. Sure, Sprint has plans to expand throughout 2010, but combined with the fact that the EVO is still a ways off from launch, the X10 will have at least a couple of months to bask in the glory of being the top dog of Android phones.

Go ahead and preorder the Sony Ericsson X10 from Rogers here, and if you do it before April 14, you’ll get a free Bluetooth headset and a chance to win some tickets to FIFA. If you happen to be in the Europe, Vodafone UK has it, as well as T-Mobile Germany.

Does your iPad have WiFi signal strength issues?online surveys Today isn't a good day for Apple's iPad PR team. As...