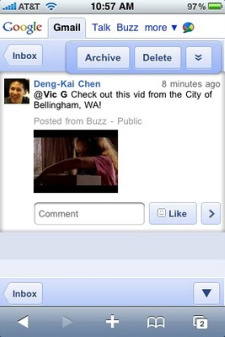 Google is making a hard push to make Buzz a bigger part of your life and it has integrated the service with the mobile version of Gmail for Android and iPhone.

“Now, you’ll see buzz in your inbox on your phone just like you do in the desktop version of Gmail, complete with the little Google Buzz icon,” Google said in a blog post. “When you open a buzz post from your inbox, you can perform all the standard functions, such as liking the post of commenting, just as you can from the desktop Gmail inbox.”

So this could be cool if you’re a big Buzz fan but I find this to be incredibly annoying. I don’t want Google’s dumb social networking clogging up my inbox (it’s mainly just piped-in Twitter feeds anyways) so I’ve turned it off using the integration settings. Maybe I’m just missing the boat here: any Buzz fans want to tell me what I’m missing?