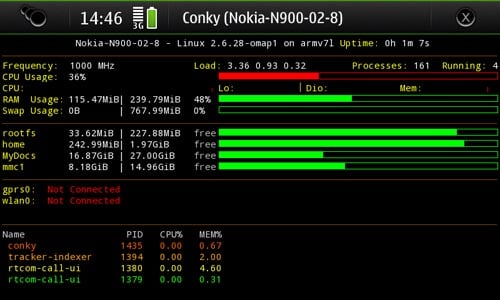 The Nokia N900 comes with quite fast 600MHz ARM Cortex A8 processor, which is also found in some other products like the iPhone 3GS and Palm Pre. If that’s not good enough for you and you’re willing to do some hacking, apparently you could make your Maemo baby joins the 1GHz race.

That’s exactly what Maemo forum member Lehto has managed to do. He was able to drive the N900’s core clock speed from a mild 700MHz boost to 950MHz. Scrap that, he said he’s had his N900 going even faster!

Top speed kernel was not released (unlike those that drive your N900 up to 950MHz) and even if it was I wouldn’t recommend trying it out. The faster N900 will certainly affect the battery life and maybe even the machine lifetime. And it’s not like the out-of-box N900 is a slow device.

Still, it’s good to know this is possible and that at some point — for instance when you buy a new phone and are free to play with the old one — you could take the risky route and make your (at that time) old N900 racing with the rest of the pack.

This is not exactly what you would call a mobile-related news item, but it's somewhat related so we're going with...