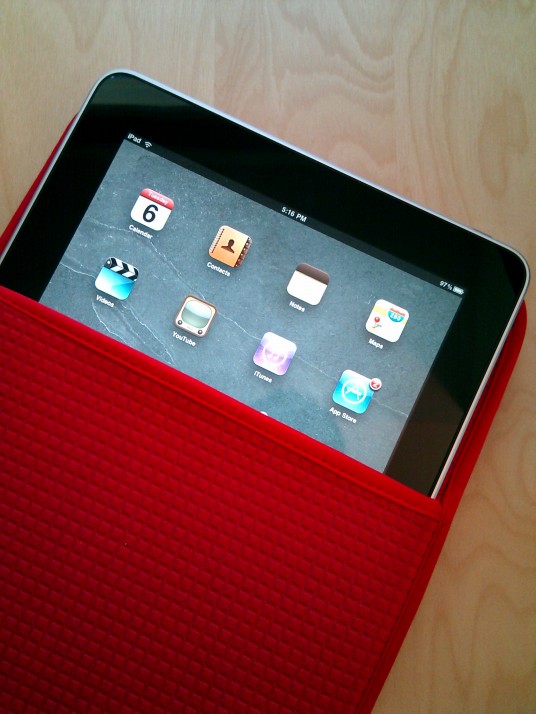 Fancy yourself a jet-setting globe-trotter with reason enough to carry an iPad onto the airplane? Well, even if you’re not some sort of big-shot with frequent flier status on multiple airlines, you’ll probably be glad to hear that the US Transportation Security Administration (TSA) – you know, those barely literate security agents tasked with screening travelers for suspicious activity – has announced that the Apple iPad is security-friendly. Unlike laptops, you can leave the iPad in its carrying case/sleeve/portfolio as they pass through the X-ray machine. You’ll still have to take your shoes off and wait as the the TSA randomly screens the blue-haired lady in front of you in line.

Here’s the thing, though. You probably won’t have to remove your iPad from its carrying case. The TSA is exempting most iPads from their usual laptop screening procedures because the slim tablet doesn’t travel with “bulky” accessories and is small enough to be easily identified on by an X-ray technician. That being said, if you toss your new fingerable Apple gadget into your laptop bag along with your usual assortment of data cables, data cards, 3G modems, external hard drives, and cameras, you’re likely going to be asked to remove the iPad for inspection.

The TSA is currently educating its security staff on how to deal with iPads showing up in airports. With 300,000 units sold on launch day alone, it’s inevitable that the tablets will start hitting the X-ray conveyor belts in an airport near you. As long as you keep your svelte iPad in a likewise slim case or sleeve (like the one pictured above), you’ll be good to go with a somewhat hassle-free security checkpoint experience.

For the record, you might actually get away with keeping your MacBook Pro or other laptops in their carrying cases if the cases are slim and lightweight enough to satisfy TSA personnel.

If you think all those swell games on the iPhone, iPod Touch and iPad are making Nintendo nervous, you'd be...