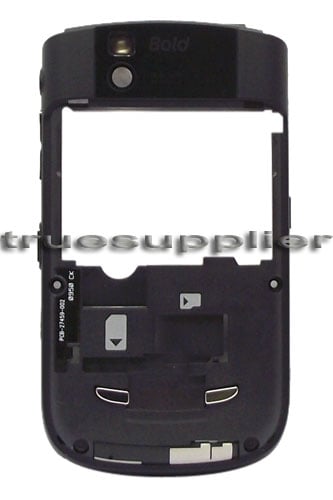 The unannounced BlackBerry Bold 9650, previously codenamed Essex and rebranded from the Tour2, is trundling closer to a release on Sprint and Verizon now that the parts showing up at TrueSupplier. As is, the casing looks more or less like the existing Tour (Bold branding aside), but based on earlier pictures we’re fairly certain the trackpad and Wi-Fi will be included.

Folks have been waiting at least a year now for this device, primarily for the Wi-Fi that really should have been included with the BlackBerry Tour 9630 from the get-go. Despite the setback, the Tour handled reasonably well in the reviews, and if the 9650 runs anything like its grandpappy, it’ll have a 3.2 megapixel camera, 256 MB of application memory, 528 Mhz processor, and a 480 x 360 display. The BlackBerry 9650 promises to be one of the more tame new device from RIM this year, since we have a new Pearl, a slider device, and potentially another Bold with a touchscreen to look forward to.

Storm 9530 users, hope you weren't feeling left out this morning when yet another OS went live for the Storm2...