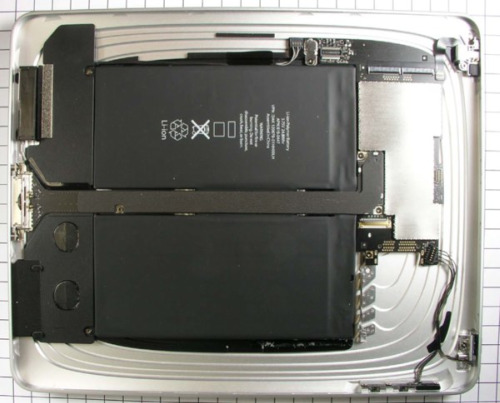 The iPad is being sold by Apple for a starting price of $499. That’s a fairly low price-point for a new Apple computing gadget. But, how does that translate into profits for the tablet maker? Well, a new bill of materials (BOM) analysis from iSuppli pegs the base iPad 16GB model with a component cost of almost $260. The research firm updated their previous BOM estimate – which was previously $219 – after having a chance to take a new tablet apart component by component. What does that mean? Well, for every 16GB iPad that Apple sells, the company cashes in on a cushy profit margin of over 50%.

The additional component costs are attributed to the iPad using more silicon chips than previously expected and a touchscreen that registered slightly higher on the cost scale than iSuppli had initially estimated. The size of the iPad’s expansive 9.7-inch capacitive touchscreen is apparently so big that Apple had to employ three chips to keep tabs on touch inputs. The screen itself is the costliest component of the bunch, costing Apple an estimated $95 a pop. The unibody aluminum casing costs Apple $10.50.

Apple isn’t a stranger to industry-leading profit margins. Their iPhone lineup BOM is so low compared to retail price, that it literally funnels cash into the company’s coffers with every purchase – the iPhone 3G has been estimated to carry a 55% profit margin. This fact alone has led tech pundits to consider value share – the percentage of industry profits earned by any one company – alongside market share metrics.

So, are you going to help fuel Apple’s profits this year with an iPad purchase of your own?