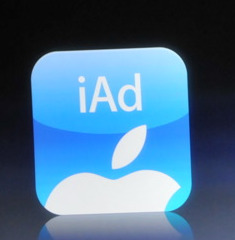 Apple has just made a large bid to become a dominant player in the mobile advertising market with the introduction of iAd Thursday.

The ad platform will be a part of the iPhone 4.0 operating system, which means app creators will be able to offer rich media advertising like videos, music and pictures. It is supposed to be a frictionless process that is aimed at helping developers better monetize their apps. The integration with the OS means a user won’t have to be kicked out of an app in order to check out an ad.

“The user can return to their app any time they want,” said CEO Steve Jobs. “We think the user will be much more interested in clicking on these things because they won’t pay the penalty for doing so.”

I’d imagine app creators can still use a third-party ad system like AdMob, but the advantages of using iAd is clear. You’ll be able to deliver better ads that are integrated with the apps and you’ll keep 60% of the revenues. The move also could benefit consumers because it could lead to more free apps that are high quality.

This move could have large ramifications on Google, which is also trying to capitalize on the burgeoning mobile ad market. The search giant is facing governmental scrutiny over its bid to purchase AdMob due to fears of it dominating the market, but the iAd platform appears to be a clear sign that there are viable alternatives.

With all of the iPhone OS 4.0 news coming out today, one bit of news immediately struck a chord with...