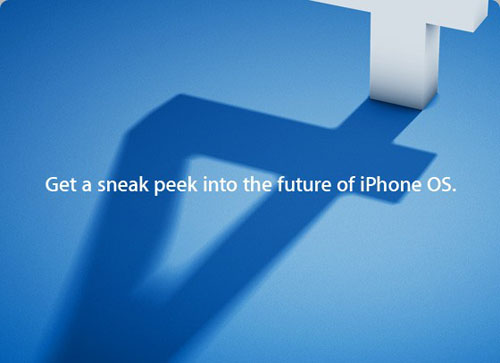 So, today is the day. In fact, we’re just minutes away from Apple’s scheduled press event, where they’re going to show the world what’s what with their latest iteration of the iPhone operating system – the iPhone OS 4.0. What will we see? Well, there may be some RFID tech built into iPhone 4.0 OS, maybe a dash of video calling, and hopefully a heaping helping of multitasking.

We’ll know exactly what Apple has planned for the next generation of iPhones before lunchtime. Make sure to stay tuned to this post, as we’ll update you all with Apple’s announcements as they happen!

[Update3]
Thre will be 7 key new features – the first of which is compatibility with Bluetooth keyboard. The next is… drum roll please – multitasking!! Finally, the iPhone and iPad can multitask apps natively

[Update4]
Steve Jobs says that it took this long to get multitasking on iPhone because Apple wanted to make sure it was an attractive interface without making your phone feel sluggish or draining the battery. “We weren’t the first to the party, but we’re gonna be the best.”

[Update5]
This is how multitasking on iPhone will work: Double click the home button, and you get a dock that shows icons for all the apps that are currently running in the background. Good implementation!

Made possible through multitasking APIs. First up is the Audio API, explained by Scott Forstall.

[Update6]
With multitasking, you can continue to run apps like Pandora in the background. The trick thing about that is that Apple allows you to control Pandora music playback from the lock screen through on-screen controls. If you like a song, just fire up the iTunes store on your iPhone and buy the song – all while the song continues to play in the background.

That was Audio multitasking API.

[Update7]
iPhone OS 4.0 will allow VoIP apps like Skype to run in the background. This is big. You can keep the app running in the background to intercept incoming calls while you’re using the iPhone for other tasks. Big!

That was VoIP multitasking API.

One drawback is that location apps will rely on cell-tower triangulation – which isn’t the most accurate way to determine location.

[Update10]
The next multitasking API is task completion. Apps can continue to complete their tasks – like uploading a pic or a video – in the background. Imagine starting to upload a massive pic to Flickr and just let it continue its task as you move on to another app, like Pandora.

[Update11]
Folders! iPhone OS 4.0 will organize apps into folders, to make it easier to find and arrange your apps. Rather than flicking through multiple screens – which can get tedious – Apple will now allow you to organize your apps into groups!

To make a folder, you enable icon moving mode by holding down on an icon. Once they jiggle, you can move icons on top of eachother to create a “stack.” This stack will become a new folder. The app icon changes into a multi-icon badge.

[Update12]
Next up on the not-too-exciting announcement docket is the ability to change your iPhone homescreen easily. Right, so it’s easier now. Great.

[Update13]
Unified inbox! Enhanced email is the next big announcement for iPhone 4.0. You can now view emails from all your various email account in one convenient inbox. Nice!

Allows more than one Microsoft Exchange account. You can view by specific inbox quickly and easily. You can also view emails as threads.

You can also open email attachments with apps. Cool. Not that cool, but cool.

iPhone is now an eBook reader

[Update15]
Next up – iPhone 4.0 will bring Apple up to speed in the enterprise segment. OS 4.0 will offer better data protection. Apple allows mobile device/fleet management and wireless app distribution. IT managers can now remotely manage iPhones, down to which apps are available for certain users.

Combined with multiple Exchange accounts, support for Exchange 2010 and VPN, RIM is going to have some competition for its BlackBerry service!

[Update16]
iPhone OS 4.0 will add a social gaming network. Nice, so I can feel inadequate in my gaming prowess whenever, wherever.

[Update17]
The rumors were true! Apple is launching their own mobile advertising service. iAd is the name, you’d do well to remember that.

Steve Jobs says that mobile ads on free iPhone apps suck right now (you hear what he just said, Google and AdMob? Them’s fighting words!). He says that Apple has the opportunity to push 1 billion ad impressions per day through iAd, while ensuring quality ads.

Jobs wants to deliver ads that invoke emotion and encourage interaction – much like desktop ads. Apple is all about quality – and they want to bring quality ads to the iPhone and iPad.

iAd is built into the iPhone 4.0 OS, and ads will be served and hosted by Apple themselves.

Better yet, app devs get to keep 60% of ad revenues!

[Update18]
iPhone OS 4.0 will be made available iPhone 3GS and iPod Touch 3rd Gen this Summer. iPhone 3G and iPod Touch 2nd Gen will get it as well, but won’t have multi-tasking functionality. Boo!

iPad will have to wait until Fall to get iPhone OS 4.0. Double Boo!

iPhone 4.0 will hit iPhone users in Summer. iPad users will have to wait until Fall.

Netflix may soon come to Android

As an Android user, I've been a little jealous that the iPad (and soon the iPhone) get the excellent movie-streaming...