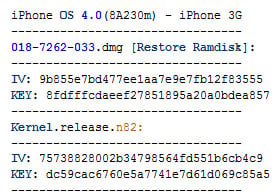 The iPhone OS 4.0 was unveiled today, showing off some really cool features – which should have been available years ago, to be honest – that will finally make the iPhone 3GS as close to a completely functional smartphone as we dare hope for. But, we’ll all have to wait until Summer 2010 before the general public can download the next-generation iPhone OS onto our iPhones. That is, unless you’re an iPhone developer – in which case you can download the OS 4.0 beta and install it on your iPhone. Or, say you’re an iPhone hacker who goes by the handle “iH8sn0w.” In that case, you’ve already downloaded the beta and you’ve already (allegedly) jailbroken the damn thing! Yup, that’s right, the iPhone 4.0 OS isn’t even live and at least one hacker has managed to open up the file system for all to fool around with.

At this point, all we know is that iH8sn0w claims to already have a working jailbreak solution for the unreleased firmware. He’s also posted the keys (image above) here. Unfortunately, it’s unlikely that we’ll see the jailbreak go live before Apple officially launches OS 4.0 – releasing the jailbreak ahead of the official launch would give Apple time to plug the security hole that allowed iH8sn0w (and a lot of other iPhone devs) to do their thing.

Still, it’s good to know that the jailbreak for iPhone OS 4.0 is already out there!

[UPDATE2: The iPhone OS 4.0 really is jailbroken, but not by iH8sn0w. The iPhone Dev Team’s MuscleNerd has posted video demoing jailbreak on the upcoming OS 4.0. Find it here.]

[UPDATE: It looks like there was a bit of miscommunication. iH8snow replied on Twitter to the question of whether he would be working on a jailbreak of the iPhone 4 OS. His reply was “I already have.” – Meaning, he had already started working on the jailbreak, not that he actually successfully jailbroke it already. It was taken that he already had, but this is sadly not the case.  So, it looks like we have a little more time to wait, but hopefully we will see a jailbreak soon!]

Excited about what's going on in the iPhone ecosystem (or are now considering learning how to code iPhone apps), but...