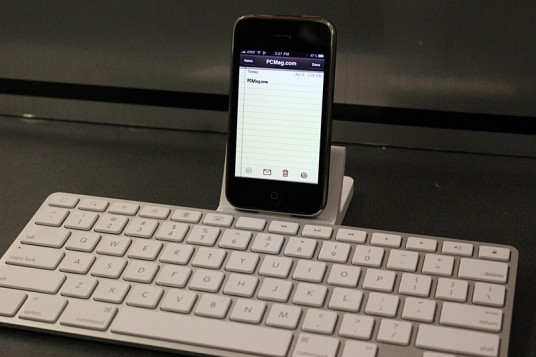 Did you know that the iPhone 3GS will work with the iPad Keyboard Dock? Well, consider yourself put on notice. Steve Jobs was so busy talking up the multitasking and iAd features of the iPhone OS 4.0 on Thursday’s keynote stage that he apparently forgot to mention that the next major iteration of the iPhone OS had a handy little trick hidden up its sleeve. With iPhone OS 4.0 installed, the iPhone 3GS is fully compatible with the iPad Keyboard Dock! In addition to enabling Bluetooth keyboard support on the iPhone, the iPhone 4.0 OS allows you to use your decidedly more pocketable Apple phone with the keyboard dock designed for the iPad.

What’s interesting here is that Apple is allowing the iPhone and iPad to cross-compete in ways that we wouldn’t have expected from the iron-fisted gadget maker. With the ability to work with wireless keyboards and the iPad’s keyboard dock, the Apple smartphone essentially treads on ground that could be seen as primarily the Apple tablet’s turf – using the device for long-winded productivity tasks, like lengthy emails and docs.

So, the question is – if both the iPhone and iPad support Bluetooth keyboards and multi-tasking (which they will, eventually), will you be inclined to buy both the iPad and iPhone? If so, why? If not, which would you rather buy?

The Mobile Roundup – All eyes on Apple edition

It's Friday and we're already starting to think about the weekend. But, dear readers, I'll be giving you weekly recaps...