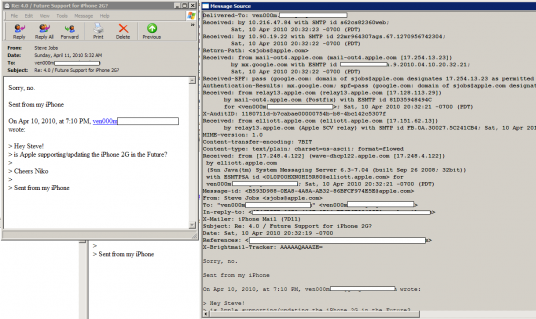 As if the lack of OS 4.0 love wasn’t enough indication, in one of his warm, cozy e-mails to an avid fan, Steve Jobs has said flat-out that the original iPhone will not be receiving any updates or support in the future. Early adopters, that might break your heart, but let’s face it, the phone’s two years old, and you’re about due to renew your contract anyway, right? Planned obsolescence is a natural part of any manufacturer’s business strategy, so it’s hard to get overly bitter about the whole practice. Still, RIM continues to sell and support the Pearl, Curve and (to a lesser extent) 8800 BlackBerrys released in 2007; I find it hard to believe that Apple’s cutting off their ties with the first generation iPhones quite this early. Is multitasking really that strenuous on its old 412 Mhz processor? The iPhone 3G has the same processor, and it’s getting OS 4.0,  so what gives?

Kik, the guys who were working on an especially promising music application for BlackBerry, have switched gears and launched something...