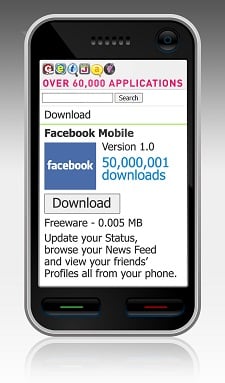 GetJar told us it has seen more than 50 million downloads of the Facebook app and I thought it was interesting because it shows the growth of the independent app store and the growing importance of mobile for the world’s largest social network.

“With more than 400 million users around the world, people are increasingly looking to stay connected through Facebook from their mobile device,” said Alison Rosenthal, head of mobile business development for Facebook, in a prepared statement. “GetJar has helped us bring the Facebook mobile experience to millions of people regardless of their mobile platform, phone model or carrier.”

GetJar provides free apps to many features phones and some smartphones. The company has told me it expects to thrive in an App Store-centric world by offering content for a large variety of devices. They want to be the grocery store, as opposed to the boutique butcher. It’s a solid approach because there are significantly more feature phone users than smartphone customers but that will soon change. I’ll be keeping my eye on GetJar to see how it can adapt.

As for Facebook, this just shows that there is a strong desire to stay connected with the social network on the go. The company is expected to launch more location-based features soon and mobile will undoubtedly play a key role in this. I expect them to launch an LBS platform for developers, so get used to a lot more Foursquare check-ins in your stream. The company’s f8 developer conference is just around the corner and we’ll be there to cover its mobile ambitions.

This just in - Opera sent us a note letting us know that their speed-demon Opera Mini web browser for...