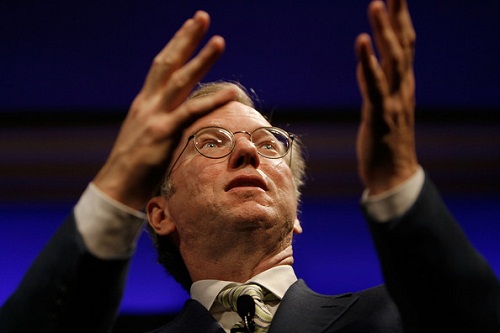 Apple iPhone developers weren’t the only ones drooling when the company introduced the iAd mobile advertising platform with the iPhone OS 4.0 software, as Google also thinks it can help the search giant acquire AdMob.

Google spent about $750 million trying to buy AdMob but the Federal Trade Commission is taking a close look at the deal and may block it because it could give Google too much power over a small industry. Google CEO Eric Schmidt said Apple’s mobile platform shows there is “evidence of a highly competitive market.”

“It’s been really interesting talking to them because they are so dead set against this,” Schmidt said about the FTC. “They have been clearly positioning to try to stop this.”

The iAd platform is intriguing because it’s tied directly in the operating system, which means companies will be able to implement rich-media ads that don’t break away from the app experience. I think it’s a clear sign that’s there’s competition in the space but let’s not forget how dominant Google’s online ad platform is. Combining that with the mobile space – which many expect to be the next big market of the future – could give it the ability to exert monopoly qualities. We’ll keep our eyes on this one.

The FCC filings for T-Mobile's myTouch Slide (a.k.a. HTC Espresso) hinted that the Android smartphone would be arriving soon, and...