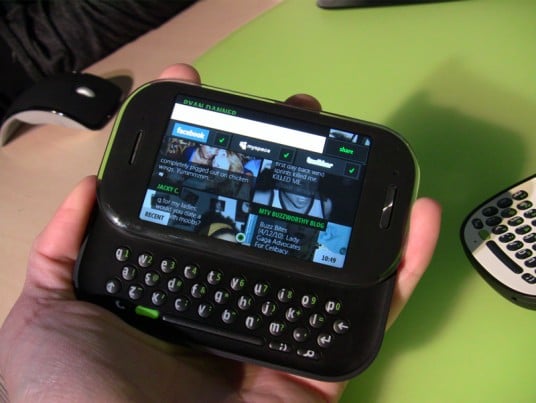 Microsoft launched the pair of Pink phones that had been rumored for months. But, instead of going with the confusing “Pink” brand, the company decided to rebrand the consumer-oriented phones under the “Kin” moniker. Of the two phones, tahe Kin 2 is the larger device. Where the Kin 1 is the compact Kin phone with an emphasis on one-handed usability, the Kin 2 is the more powerful, arguably better looking handset. We got a chance to go hands-on with the Kin 2 today, and it’s definitely the more impressive of the two Kin phones.

The Kin 2 packs an 8-megapixel camera capable of HD video recording, HVGA display, 8 GB of internal memory, FM radio, stereo Bluetooth, a landscape-oriented slide-out QWERTY keypad and a whole mess of social networking apps and functions preloaded. Like its little brother, the Kin 1, the Kin 2 automatically uploads your pictures and videos to a web-based cloud service – known as the Kin Studio – so you can get your content on any computer with a browser at any time. The “Spot” feature is allows you to share content easily by dragging web pages, photos, etc. to the little green spot at the bottom in the middle. You can shoot content over to people directly, or onto Facebook and other social networks (Myspace, Microsoft Live). Finally, the “Loop” home screen is peppered with live information from your friends’ Facebook, your news feeds and Twitter updates, so you can see what’s happening at a glance.

The Kin 2 is decidedly larger than the Kin 1. But, that’s the point. How does that translate into usability? Well, the larger, HVGA display is much more usable than the Kin 1’s compact makeup mirror-sized screen. The sliding QWERTY keyboard takes a bit of getting used to – the thin display and beveled edges make it hard to slide the screen up by pushing on the edge of the screen. You have to place your thumb flat on the side of the display and slide upward to get the keyboard to spring out with no problems. Otherwise, you run the risk of dropping the phone altogether. Not good.

The keyboard is very Sidekick-esque, which is a good thing. The keys are little far apart for our tastes, but that’s a subjective critique. The FM radio is cool, as is the HD video recording and Kin Studio auto-upload feature. We’d like to have seen Calendar and instant messaging support, but we figure the target demographic won’t miss them too badly.