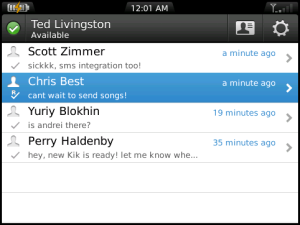 Kik, the guys who were working on an especially promising music application for BlackBerry, have switched gears and launched something called Kik Chat for iPhone and BlackBerry. On its own, it’s a pretty simple messaging service that lets you send free messages back and forth, regardless of platform, but the real convenience is that you can send outbound SMS messages using the app for less than a penny per text, and even then, the first 50 Kik to non-Kik messages per month are free. This could potentially be handy for frequent, long-distance texting when either end doesn’t have an iPhone or a BlackBerry (since if both sides have a smartphone, they might as well be using GTalk or the like).

It’s a modest start, but Kik promises that this will be thek foundation for sharing music, pictures and video. The music bit I get, but an instant messaging/media sharing app is a far cry from the music store we had seen from these guys earlier. The developer has confirmed that the streaming music app is still in the works and that it will be out there for Q2, no doubt with a heavy tie-in with Kik Chat.

BlackBerry 9800 (Talladega?) Shows up in UAProf

After finding the User Agent Profile for the unannounced BlackBerry 9300, it looks like someone got to digging and found...