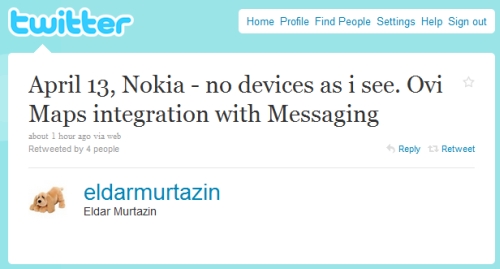 Nokia put up a count down timer to an event set to kick off in a little under 22 hours, and while fanbois may be foaming at the mouth, expecting to finally hear some information about the N8 that’s been leaked to high heaven, Eldar from Mobile-Review has it under good authority that what we’re really going to see is nothing more than Ovi Maps integrated into Nokia Messaging. What that means exactly, and how tight the integration will be, remains to be seen, but like everything else Nokia makes, it’ll probably only work on Nokia devices so good luck sending your location via Ovi to an iPhone or BlackBerry user.

Now don’t pout your lips just yet, Eldar did say that Nokia is going to announce some devices this month, as in more than one. There’s roughly 18 days left in the month so that should keep you on the edge of your seat long enough that your butt goes numb.

Nokia: Acquisition of Novarra is a done deal; Plus my two cents why this may work for the Finnish company!

Nokia announced that it has completed the acquisition of Novarra, which [acquisition] was initially announced on March 26, 2010. The...