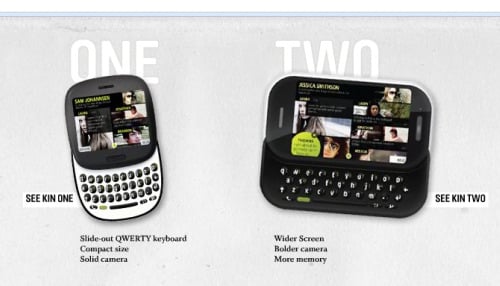 So, we’re live from the Microsoft event but all the information on the “Project Pink” devices is already official.

It’s going to be called the Kin One and Kin Two and, like we thought, these devices are aimed at social networking teens. The Kin One has a smaller, odd shape, a touch screen, full QWERTY keyboard, 5-megapixel camera, 4 GB of internal storage and it will use Zune software to play media. The Kin Two has a wider screen with a keyboard that looks more appealing. It has an 8-megapixel camera that can shoot HD video (neato), 8 GB of storage and Zune-tastic integration.

No clear word on the operating system yet, but we’ve heard it will be a custom one that’s not Windows Phone 7. Both handsets should be coming to Verizon later this year.

We’ll have a thorough breakdown of all the services and social networking integration later in the day. Keep it locked on our live blog for up-to-the-minute news.

It's not much of a surprise but the Federal Communications Commission has cleared the awesome Samsung Galaxy S and it...