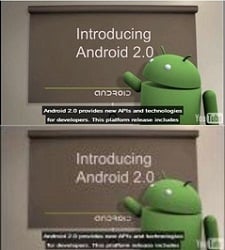 You’re not going crazy if you noticed something a bit off with your pictures on the Droid after the long-awaited Android 2.1 update because Google admits there’s a lower image quality than in the previous Gallery application.

So it’s kind of lame but I understand the trade-off: the new Gallery app with 2.1 is far cooler than the one before it, which was boring garbage. I’m sure Android 2.2 will restore the image quality, so let’s start the countdown for that one. Oh, this issue was first brought up by the good folks at DisplayMate and they have an excellent comparison of the screens on the Droid and Nexus One. Check it out with the “via” link below if you’re so inclined.

Fitness software developer Gym Technik has just struck up a partnership with Withings (who make a Wi-Fi-enabled weight scale) to...