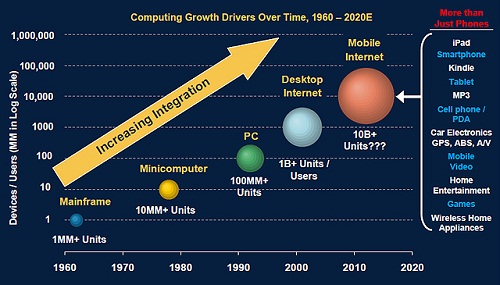 Thanks to the success of devices like the iPhone 3GS and Motorola Droid, a Morgan Stanley analyst is predicting that the mobile web will overtake the fixed Internet by 2015.

The analyst, Mary Meeker, said the mobile usage is ramping up at a quicker velocity than the desktop version ever did. She’d know too, as she’s been a part of Netscape and Google’s initial public offerings. What’s going to drive this? Meeker said the ubiquity of fast mobile networks with advanced devices are leading more consumers to use their handsets to surf the web.

Additionally, she said mobile users are more willing to spend money on content, which is music to the ears of many publishers and developers. Apple’s App Store model has proven wildly successful with consumers because it allows for relatively easy to discover content, most programs have a low price tag, and the embedded payment system makes buying a snap.

This shouldn’t be much of surprise to IntoMobile readers because we’re probably ahead of the curve in this regard. Google has an even more aggressive timetable, as the search giant has said it expects smartphones to make desktops “irrelevant” in as soon as three years.

Firefox has been running on the Nokia N900 for some time now and is coming soon to Android, but we...