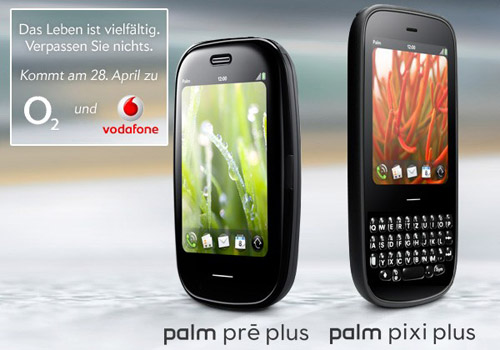 Just when I posted a “still a rumor” that the Palm Pixi Plus is about to hit the O2 Germany, we got the news confirmed by Palm. As a matter of fact, it’s not just O2 that will get to carry the Pixi – Vodafone is joining the party as well. Best of all, Pixi Plus won’t be the only webOS device ze Germans will be able to play with – its older (and more powerful) brother Pre Plus will also be included as part of the deal.

The date is set at April 28th, though unfortunately we don’t know the pricing at the moment. I’m guessing both O2 and Vodafone will subsidize the two phones, in a move that could even make the Pixi available for free on some solid contract that includes mobile data.

Now it’s up to Palm and their negotiating skills to reach other Vodafone and Telefonica (owner of O2) markets. If it succeeds in that, Palm may actually postpone its “dying process,” or at least increase the value of the company and make shareholders happier in an event of acquisition…

Vodafone to launch its own Android app store?

Vodafone (like other carriers) refuses to be turned into a dumb pipe. They want to control the user experience and...