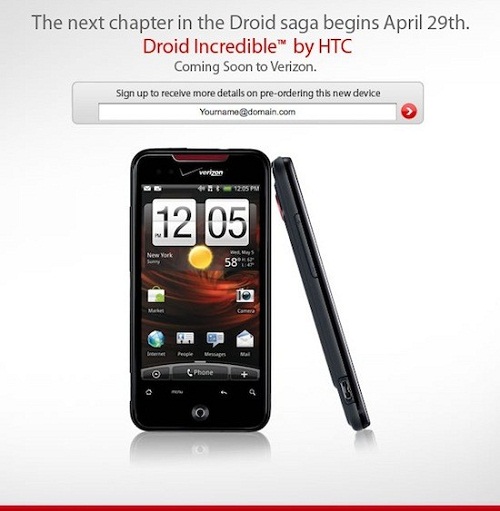 I know there is a ton of anticipation for the HTC Incredible and Verizon Wireless will soon put us out of our misery because it put up a teaser web page for a device called the Droid Incredible.

The site, which now requires a log-in, clearly shows the device with Verizon branding and it gives us the date of April 29th. Does this mean it will be released that day or simply announced? It’s too early to tell but judging from the leaked equipment guide, the Droid Incredible is going to be worth the wait.

The handset will rock an 8-megapixel camera, 3.7-inch capacitive display, Android 2.1 and HTC’s Sense UI. It’s going to be a rocking smartphone but remember that these high-end devices on Verizon will come with a steep early-termination fee. I doubt you’ll want to return this bad boy anytime soon, but it’s always good to have all the information to make a decision.

[Via Verizon, photo via Engadget]

Android-Powered Motorola ‘Twist’ Could Double as a Coaster

Remember that odd, square-ish shaped slider we caught a glimpse of the other day? Rumor has it the new Android-powered...