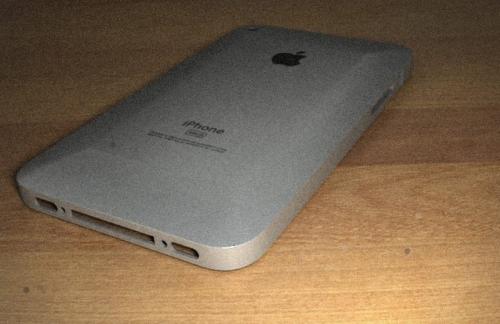 We’ve been hoping, amidst the flood of iPad and OS 4.0-related news, for a glimpse of the upcoming Apple iPhone 4G / iPhone HD. We already have a list of specs to hope for in the next-generation Apple iPhone (including RFID, 802.11n WiFi, high-res display, solar power, and an A4 CPu), so all that’s left to hope for are leaked pics of the iPhone HD casing. Well, today is the day that we get our first look at what is allegedly the aluminum unibody casing for the unreleased and unannounced iPhone 4G. New photos have been spotted, showing off what looks to be the back cover of an iPhone!

But, before you get all riled up and excited for these purported iPhone HD spy shots, take this all with at least one grain of salt (we usually go the two-grain route, just to be safe). The pics you see here have apparently gotten familiar with Photoshop CS4, according to the meta data embedded in the pics.

This means one of two things: 1) the spy who took these pics decided to use Photoshop to crop and possibly balance contrast and lighting effects in the image (which is plausible, given the grainy, seemingly color-corrected look of the images) or 2) that the supposedly leaked pics are completely fake and aren’t realistic representations of what Apple has planned for the upcoming iPhone HD/4G.

Let’s say this leak is legit. What does it tell us? Well, it tells us that Apple is indeed looking to unify the design aesthetic of their product line – brushed aluminum unibody construction is already the theme for the iMac, MacBook Pro, and iPad, so would be fitting on the iPhone. The pics also tell us that there will be a new 64GB model – likely the highest-end of the iPhone lineup – with twice the storage capacity of the top-of-the-line iPhone 3GS.

We’ve said before that the next-gen “Designed in Cupertino” handset will likely sport the brushed aluminum look, and this could very well be confirmation of that speculation. Still, we have to take these pics at face value until we get more solid information.

What do you think? Does this look like something you’d want to buy in the next Apple phone? Does it make sense for Apple to roll out a brushed aluminum iPhone casing? Sound off in the comments!