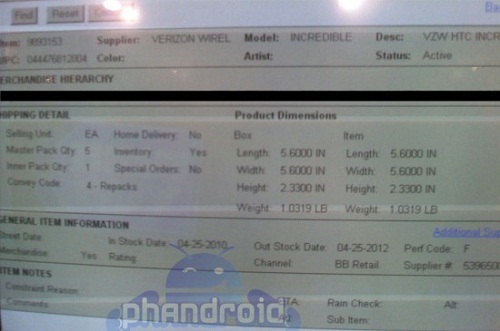 Well, it looks like the Droid Incredible leaks are coming fast and furiously ever since Big Red accidentally outed the device yesterday. Now, the good folks at Phandroid are saying the lovely Android handset will be in stock at Best Buy and will retail for a cool $599.99 without a contract.

If these screen shots are correct, this doesn’t mean the retailer will be able to sell the handset that day because it only means that’s when it will receive its shipments. The actual street date could be the 29th, a week later, or even two weeks later. There’s also no need to buy the Droid Incredible without a contract- it’s a CDMA phone that will only work with Verizon (I know, you hacker elite can get it on Sprint, but come on).

Still, any Droid Incredible news is good news because this baby looks hot. It’ll rock a 3.7-inch capacitive screen, Android 2.1 with Sense UI and an 8-megapixel camera. Is it enough to get me to ditch my Droid and re-up for another two years? Hate to say it, but I think I’ll wait to see what Apple introduces June 22 before I make a decision.

Review: The Cliq XT gets points for effort but fails to wow

Motorola's making a big bet on Android to put its handset division back in the red and the Droid showed...