Gleeks everywhere will be happy to hear that their favorite musical-style TV show has made the transition from the small screen to the even smaller screen. We’re talking, of course, about the new hit TV show Glee. Thanks to iPhone developer Smule, Glee won’t just be a one-night-per-week affair. If you have an iPad or an iPhone (or both, like us) you’ll be able to Gleek-out with the new Gleek app. The app lets you sing along to your favorite songs, as a virtual backup vocalist for the cast of Glee. 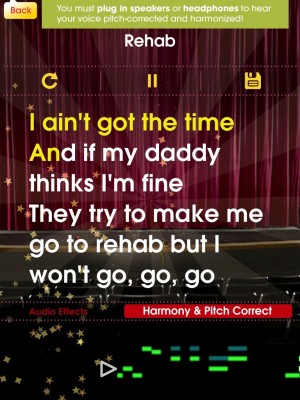 Not so stoked on the idea of screeching your unpracticed vocal chords alongside the cast of Glee? Worry not, the Glee iPhone/iPad app uses voice and pitch-enhancing technology to automagically make your voice sound like you’ve had years of singing lessons – or at least sound like you haven’t been on smoking a couple packs a day for the past couple decades. The app will even harmonize your voice and give you backup vocals of your own, in real-time and with impressive results.

You’ll want to use headphones with this app, otherwise you won’t get the full effect of hearing your pitch-corrected and harmonized voice laid on top of the musical track. As for matching your pitch to the song, the app gives you visual cues to aid your voice – think Rock Band for Xbox 360, but just the vocals.

The app also has a social aspect. You can invite your friends via email, Facebook, MySpace, and Twitter to sing along with you to your favorite track. As they hop on the app and start singing, you’ll hear their voice added to the chorus. And, with the ability to link up with complete strangers around the world (think Glee Roulette, with less filth), it’s possible that we’ll see massive Glee sing-alongs rolling across the globe like some overly enthusiastic TV show phenomenon. There’s also a listen-only mode, if you feel like lurking.

The app costs $2.99 and is available for both iPad and iPhone on the AppStore.

In a bit of a delay, Adobe is now saying that it expects smartphones to hit the market with full...