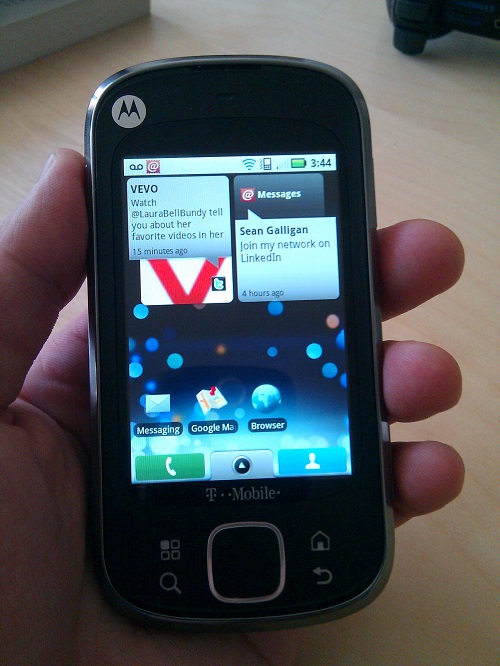 Motorola’s making a big bet on Android to put its handset division back in the red and the Droid showed it can pump out some quality hardware. Most were a bit underwhelmed with the Cliq though, and the Cliq XT I’ve been fondling takes nearly all of its cues from that device, with a few nice wrinkles added in. Does the Cliq XT add enough features to warrant your attention or is it just a boring, keyboard-less Cliq? Read after the jump to find out, dear readers.

Here’s a quick look at the Motorola Cliq XT by the numbers: 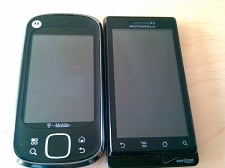 Some may tell you differently, but I really liked the weight and feel of the device. It’s not just the Cliq without a keyboard – it’s amazingly pocketable, is light at only 4.4 ounces and the leather-ish finish on the back is nice to touch. My non-tech friend saw it and said it looked kind of “cheap” but I think he’s a dumb man. While it’s not as instantly crowd-pleasing as a Nexus One or Droid, it is a solidly built device that exudes an understated confidence. The most apt comparison would be the myTouch 3G on T-Mobile and I much prefer the look and feel of the Cliq XT.

There’s an odd trackpad in the middle that has an weird texture – it’s responsive enough but I would like a little more sensitivity. The back, home, search and menu options are hard buttons that are easy to press. The power/unlock button is on the right spine which bothered me – it works well but I’m just so used to having that functionality on the top of the device. There’s also a good camera key on the right spine, while the adequate volume rocker and microUSB port are on the left spine. The standard headphone jack is correctly placed at the top and it worked with a variety of headsets. To get to the battery, you have to use a frustrating mechanism on the bottom of the handset. You have to use way too much force to rip that battery cover off, in my mind.

The 3.1-inch HVGA screen is the same that’s on the Cliq and Backflip, and while it’s bright enough, it’s a definite step down from something like the Droid. There is multitouch support for the browser and gallery but I couldn’t use this on the preloaded maps. The screen’s also too small and this makes typing and MotoBlur a pain. There just appears to be so much wasted space on the face of the device too. The accelerometer switches the orientation of the screen quickly and the notification light is directly above the display – it’s not really bright enough to grab your attention.

The handset could be a bit thinner, lighter and have a bigger screen but I still liked it. It’s sturdy without being heavy and it looks like it will survive a pounding. 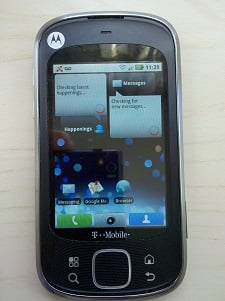 The Cliq XT comes with Android 1.5 and MotoBlur and this is just desperately crying out for the speed boost that 2.1 would bring. Sure, Motorola is reportedly planning to do this upgrade in the second quarter, but be prepared for some sluggishness switching between apps until then. My main beef with Android 1.5 is that it only allows you to have one Gmail account associated with it and this is a complete non-starter for me (I need at least 3). If that’s not an issue for you, it’s a capable OS that can easily browse the web, upload photos on the go, download apps, and all the other things you expect from a modern smartphone. You will be missing out on some of the newer goodies though, as apps like Gesture Search only work on Android 1.6 and above.

As for MotoBlur, I’ll echo what I said with the Devour review: it’s a good concept but it needs more refinement and a bigger, better screen to work well. The goal is noble because Motorola is trying to aggregate all your connections around the web in a simple, intuitive interface. The Happenings widget, for example, throws your Twitter and Facebook updates on your homepage and you can expand this widget to manually slide through your friends’ messages. The problem with the smaller screen is that your display quickly becomes too crowded and this kind of defeats the purpose of MotoBlur because it becomes more difficult to keep track of your social graph.

The small screen also gets in the way of typing, as the virtual keyboard quickly becomes cramped. It’s fairly responsive and has decent auto-correct software but still seems way too small in portrait mode. Maybe throwing on Swype or Thick Buttons would help but this is such a fundamental part of the experience that I shouldn’t have to fix it with a third-party app.

As with any Android phone, holding down the home button to cycle through running programs will greatly help. I have too many Twitter and Facebook friends (douche bag complaint, I know) so I’d suggest just ditching the Happenings and Messages widget altogether and just focus on the News and Entertainment apps, which are well done. Also, it helps if you’re already living in a Google-centric world because this Android device integrates well with all the search giant’s services. 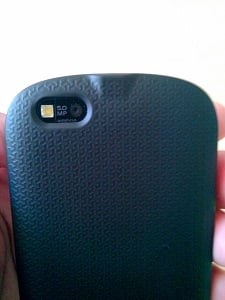 The handset comes with your standard WebKit-based browser found on other Android handsets but there’s also Flash Lite 8.1 support built in. I didn’t find this too useful though, as the smaller screen size limited the appeal of watching too many videos in a browser and Flash Lite is generally slow and crappy. Stick to the dedicated YouTube app for those videos and hope and pray Hulu comes to Android as an official app soon.

I had a hell of a time staying on 3G in my house. The thing would constantly switch to EDGE for no real reason depending on where I stand. That’s more of a network issue because the Nexus One in my house has the same issues. Overall though, I found fairly consistent 3G coverage throughout San Francisco. Connecting via WiFi is easy and works well.

The handset is also the first Android device that doesn’t blow as a music player out of the box. Dubbed the “Connected Music Player,” it has multiple features built in to help you rock out. You can do the basic stuff like play tracks by artists or songs, but there’s also a radio, song identification, community, and a handy dock at the bottom for swapping options. The smartphone also comes with Shazam preloaded so you can be the cool one at the bar who can name that tune. Kudos to Motorola.

As you can see from the pictures below, the 5-megapixel camera makes for a nice little shooter. The photos are fairly vibrant even in bad light and the LED flash can light up even the darkest night. Distance shooting can be a bit problematic but you’re probably not expecting that from your phone anyways. There’s a bit of a lag from when you press the camera button until it takes the picture but I’ve seen a lot worse on the Droid and other devices.

You’ll be able to tap your photos to edit, delete or share them and it’s about what you’d expect from this type of machine. You can crop, rotate, add text bubbles, adjust brightness and saturation, as well as monkey with other settings. There’s the ability to send a little audio postcard with your photos, which I thought was a neat little touch. The video recording is adequate – there’s the ability to upload to YouTube on the fly – but you’re not going to knock off Scorsese with it anytime soon. 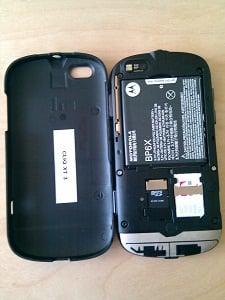 I had no problem making or receiving calls in and around San Francisco and found voice quality to be above average, no matter the setting. I would have liked a little more volume in the calls but I think I’ve made myself deaf by constantly rocking headphones, so your experience may vary. As with any Android handset, the Google Voice integration is killer and it’s a snap to get your Google contacts or Facebook friends in your contact book. There’s no dedicated dialer button but we’ve grown used to that with full touch devices. MotoBlur gets points for solid contact integration as well, although it still can’t quite get Twitter connections right.

I’m convinced we had a bad unit because I haven’t seen battery life a big gripe in other reviews, but my Cliq XT was a power hog. The first couple days I didn’t get a chance to put it through the paces and it would still die just sitting on my desk for a day. I know that the constant updates from MotoBlur can have a draining affect, but I’m talking absolutely no voice calls or music usage and the thing would still die within 8 hours. That’s completely unacceptable garbage. When going out for a night on a town I had to carry a second phone, just in case. I know this wasn’t the case with the Droid or Devour, so I’m thinking I got a bad Cliq XT.

The final take
So, beyond my beefs with the screen size and my general dislike for MotoBlur, I don’t think the Cliq XT is a bad phone. In fact, with the cool media player and excellent camera, it’s definitely above average. I still can’t recommend it though because it’s fairly boring. Nothing about the handset stands out, the hardware will soon become outdated and the unit I had was awful with battery life. On T-Mobile, I’d take it over the myTouch 3G but the Nexus One blows it out of the water and I’m sure we’ll see some more Android goodness on the carrier soon. Thanks for playing Cliq XT, but I’ll pass on you.

Any Cliq XT users want to weigh in? Feel free to let us know what you think in the comments, or you can let us know on Twitter by directing your message to me @marinperez or @IntoMobile.