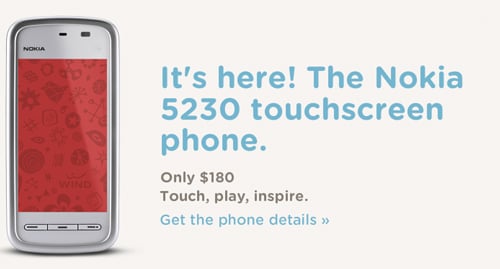 Well, that was fast. The Nokia 5230 is now for sale at Wind for $180 up front. It’s a pretty snazzy smartphone, for the price – 2 megapixel camera, 640 x 360 resistive touch display, A-GPS, 3.5mm headphone jack, and S60 5th. Edition. The 5230 joins Wind’s short lineup consisting of the BlackBerry Bold 9700,  HTC Maple, Samsung Gravity 2, and Huawei U7519, but we’ve been promised that there are plenty more handsets on the way. T-Mobile released the 5230 as the Nuron early last month, and since it’s running on the same bands as Wind, it makes for an easy Canadian port. I wonder how many other T-Mobile phones we’ll see up here…  Maybe the HTC Incredible? Although Wind’s device selection might not be enough to rope you in, most of their handsets have taken a price cut, and Wind is still offering $150 credit if you switch from any of the Big Three until the end of the month.

If you’re looking to pick up the Nokia 5230 from Wind, hit up their online store.