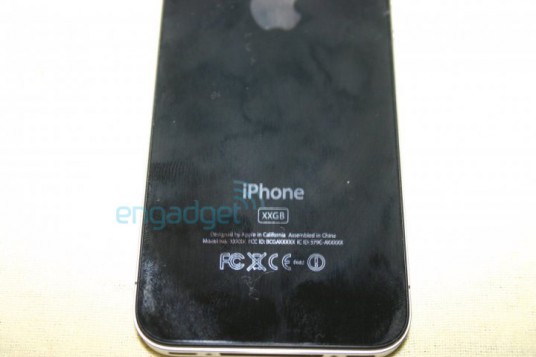 If you were to ask us how many times an as-yet-unreleased iPhone has been found sitting on the floor of a random bar in a San Francisco Bay Area town, we’d have to answer with a resounding “never.” But, following this latest iPhone 4G/HD leak, we may have to change our answer the next time you ask. Following on those alleged spy photos that claimed to show off the next-generation iPhone 4G’s aluminum unibody casing, new pics of yet another rumored iPhone 4G have popped up on the interwebs. The pics you see here show a decidedly iPhone-esque handset that might just be the first ever look at Apple’s upcoming mobile phone.

According to Engadget, this mysterious smartphone was reportedly found sitting on the floor of a random San Jose bar. The handset was wrapped up in an iPhone case designed for the iPhone 3G. But, as you can see, this handset was definitely not the iPhone 3G. What emerged from the case was a very interesting piece of kit. The kinda-iPhone-looking phone apparently boasts 80GB of storage, a front-facing camera, and has a removable battery cover. No word whether the phone is using iPhone OS (it’s not booting at the moment), but we may soon have confirmation on that front.

So, what is this mystery device? Well, there are some that think this could very well be the next-gen iPhone HD/4G. With all the rumors swirling around the blogosphere right now,  it’s easy to think that this may be the rumored handset from Apple. But, there’s another possibility. The purported iPhone HD that you see in these pics could simply be a Chinese iPhone knock-off of some sort. It’s also possible that this is one of Apple’s prototypes.

What’s strange is that the handset was found in a San Jose bar. If this thing is the real iPhone HD, that would mean that someone with access to the deepest depths of Apple’s research and development division managed to take the much-rumored handset out of Apple HQ and bring it with him for a couple drinks. That, in an of itself, is hard to imagine happening. This person would also have had to forget this prototype in a bar. That’s even harder to imagine happening, given that this hardware is probably more important than said person’s first-born child.

As it stands, we have no idea what this handset is. Pics of this phone previously surfaced on Twitter back in February, which casts further doubt on this being the actual iPhone 4 (pics below). We’re going to file all this info under the “rumor” section of our mental filing system and wait for more information to surface.

What do you think? Would you rather the next iPhone look like this handset or these previously leaked pics?