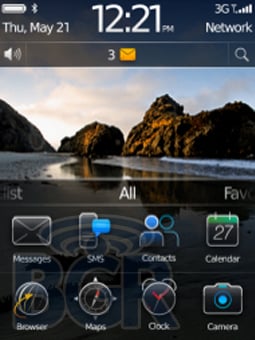 Hooah! The first credible screenshots of BlackBerry OS 6.0 have surfaced, and they look nothing like that Concierge thing. The home screen looks largely the same, except with a dial to switch between different categories of apps, and a universal search shortcut. RIM’s Webkit browser is nicely polished and will include multitouch, tabs, and a new favorites system. Speaking of multitouch, it has apparently been implemented through the entire BlackBerry experience, and will include stuff like pinch-to-zoom on the iPhone. Other small aesthetic changes like inertial scrolling and elastic menus that bounce back after extending beyond the top or bottom have also been included just about everywhere. The music app has been nicely redesigned, though mostly just a reskin from the looks of it. Photos, on the other hand, apparently load up much more quickly now, and thank god – it takes eons for thumbnails to load up from a BlackBerry’s microSD card.

Of course, the star of the show, the inbox, has been redesigned so it’s something a little less work-related and a bit more style. For example, the graphic to the left of a message now includes larger thumbnails to identify what it is (Facebook, Twitter, SMS, e-mail, etc.). RSS is making an appearance here as well, which is obviously the work of the recently-acquired Viigo. The menu system has also been replaced by a long-press popup – hold your finger on the touchscreen, and you can chose one of 9 options that surround your digit. Sounds just as functional as the old way, but way more fun.

That’s a lot to take in, and apparently there are even more features there that we can’t see. BGR doesn’t mention which device OS 6.0 was running on, but judging from the weird size, the Talladega slider seems likely, and his contact was from AT&T – take that as a hint. An announcement at WES next week seems likely, as the BlackBerry OS 6.0 will likely be in the market in June or July.

More pics after the jump!

OtterBox has just released Commuter cases for the BlackBerry Pearl Flip and the Nokia N900 for $34.95 each, while the LG...