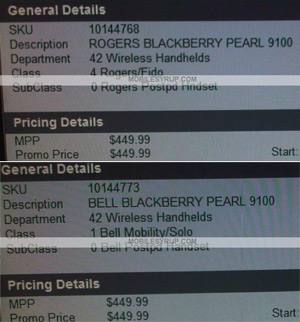 Excited about the coming of the BlackBerry Pearl 9100? Chances are, you’re not alone… I suspect there’s a whackload of current Pearl owners patiently waiting for the upgrade to new technology.

April has been particularly fruitful for 9100 news. We’ve seen it pictured next to the N1, had a peek at one running on TELUS, and even had some closeups of the keyboard to gander at. Not bad, but eye-candy can only go so far, when it comes down to it, we need a price.

Late last night my buds at MobileSyrup managed to get their hands on what appears to be inventory retail screenshots from Rogers and Bell (above). On the shots, you can clearly see pricing for the BlackBerry 9100 could very well be set at $449.99 off-contract. Neat. Now that pricing leaks are starting to come in, you can bet this isn’t the last we’ve heard of it. Any speculation what a 3-year term will run? $49.99? $79.99? Do you even care?

Tether for BlackBerry Updated to Version 1.1.0.4

Just a quick update here for the Tether for BlackBerry users out there. The app has been updated to version...