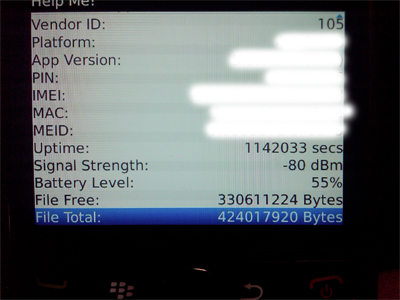 The BlackBerry Bold 9650, a refresh on the old Tour which was seeming to add only a trackpad and Wi-Fi, will also be including RIM’s first bump up to 512 MB of application memory. The most recent BlackBerrys, dating back to the original Tour, had 256 MB, which, though nice, was still not quite enough for those who avidly downloaded through the on-device App World. Kicking things up a notch will do good things for the overall experience, and will cut down on the amount of time we sit staring at an hourglass, waiting for memory to be cleared out.

The Bold 9650 has been in the works for awhile, and will likely look a lot like the original Tour, like have a 3.2 megapixel camera, HVGA display, 3.5 mm headphone jack, microSD memory card slot, and run on EV-DO 3G, with the option for dual-band HSPA. All of that’s more or less in the air, but with WES right around the corner, and a bundle of handsets in the wings, we may be seeing the BlackBerry Bold 9650 as soon as next week.  Launches on both Sprint and Verizon are expected around May 27.

Android 2.2 OS ‘Froyo’ might ‘Allow automatic updating’ of apps in the background!

Sometimes, it's the little things - the details - that really make all the difference. It's not the size of...