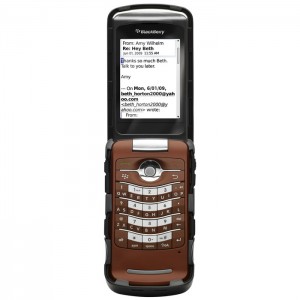 Going over the OtterBox release from yesterday, I noticed that the BlackBerry Pearl Flip 8220 they’re using in one shot is in an unfamiliar brown paint job. It doesn’t seem like this particular model has been released by any carriers yet, so may hint at something coming down the pipe. Similar slip-ups introduced the silver version of the Pearl Flip that eventually made it to Verizon, so it’s entirely possible this one will come to the public someday too. I’m digging the earth tones for sure, and would love to see some more BlackBerrys in this style. You can check out the original picture over at OtterBox.

Update: OtterBox is telling me that this is actually the red Pearl Flip, but you can see why I might be dubious. Of course, whoever’s behind the wheel of Photoshop over there might have just tweaked the colours a little too heavily (low saturation?).

Koodo To Add BlackBerry Curve 8530 and Pearl Flip in May?

Looks like some new BlackBerry devices are heading to Koodo Mobile. Well, perhaps I shouldn't say 'new'... because they're older...