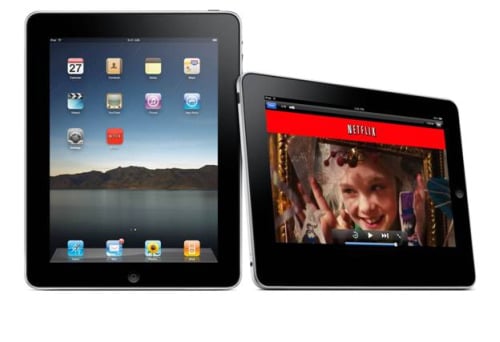 When Steve Jobs unveiled the Apple iPad earlier this year, he showed off some headlining apps that would be available for the tablet device on launch. Two of those apps were the ABC and the Netflix iPad apps. The apps promised to turn your iPad into a movie-streaming, TV-watching tablet that would give your TV and computer some self-worth issues. No doubt, many of the 500,000 iPads sold in its launch week went to fans eager to use the new-fangled Apple tablet with the idea of shunning their TV for a while and catching up on episodes of ABC’s Castle or a new release move on Netflix. But, are those apps all that they’re cracked up to be? Do the available shows and movies live up to expectations? Let’s take a look.

This is a look at Netflix’s Watch Instantly library of movies and TV shows.:

Take a look at the ABC iPad app:

Depending on your movie tastes, I’d argue that Netflix is a bit of a letdown. I assumed, somewhat naively perhaps, that the Netflix on iPad experience would essentially be like streaming all of the movies in my local Blockbuster’s New Releases section. That’s not the case. The selection is a bit limited.

On the upside, though, you get a varied selection of movies through Netflix. Regardless of your movie genre preferences, you’ll probably find a movie to keep you busy on any random night. The app is responsive and loads movies quickly over a broadband WiFi connection. If only it had a broader selection of movies.

The ABC Player iPad app comes off as a little more polished than the Netflix app, but offers far fewer available streaming video titles. You get access to all of ABC’s headlining TV shows, but not all shows give you current episodes. That’s a bit of a letdown. I like the scrubbing feature that lets you move around the episode at will, especially when you have to continue watching, say, Castle halfway through the episode. Overall, great execution of the app, but I’d like to see more available episodes for all shows.

So, what do you think? Do the streaming video iPad apps that promised to change the way you watch movies and TV shows live up to your expectations? If you’re an iPad user, have you found the apps to be everything you thought they’d be? If you’ve been considering an iPad buy has the content selection we’ve shown you here influenced your decision one way or the other? Will you be buying an iPad in hopes of putting all that ABC and Netflix has to offer in your lap?

Sound off in the comments section below and let us know if you think those apps are all that it’s cracked up to be!

The mobile roundup – An iPhone walks into a bar edition

So, you may have heard that there was that next-generation iPhone leak this week but there was also some really...