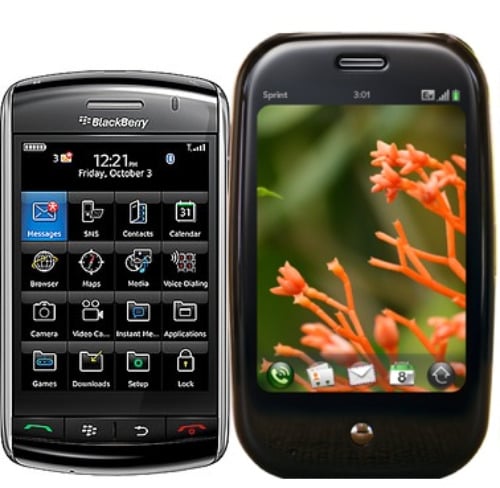 We’re here at the Research In Motion WES conference and some of the more colorful conversation includes the idea that the BlackBerry maker should buy struggling Palm.

While Lenovo is supposed to be the front runner, reports have surfaced saying RIM could be the only serious bidder. Why?

RIM is plagued by software bugs in its operating system, and needs to broaden the range of products its offer to consumer and business clients. Critics say the Blackberry needs to feature more applications and better video capabilities to keep pace with iPhone and other gadgets.

Buying Palm, according to some tech experts, would bring a superior software platform known as WebOS under the Research In Motion roof, and better position the Canadian company with clients as it rolls out the next generation of mobile devices.

It’s an interesting buy because RIM can easily afford the $1 billion or so it would take to purchase Palm. I still don’t think BlackBerry 6 is polished enough to capture the attention of the mainstream market, which is already in love with the iPhone and Android. If RIM could integrate webOS – which I still really, really love – with its rock-solid back-end messaging services, that’s a clear winner. Additionally, Palm has deep ties in the enterprise space, as well, so an acquisition wouldn’t damage RIM’s business-centric base.

The problem with this rumor is that RIM seems convinced that it doesn’t need a major jump start with its software. It has maintained a steady vision of how to operate and this hasn’t included acquisitions of this scale. With over 42 million customers, who’s to say RIM is wrong? Additionally, webOS really needs a good touchscreen hardware to be fully taken advantage of and I don’t think RIM is currently capable of that.

We’ll keep an eye on this one, as Palm will certainly be purchased by someone.

[Via The Globe and Mail]