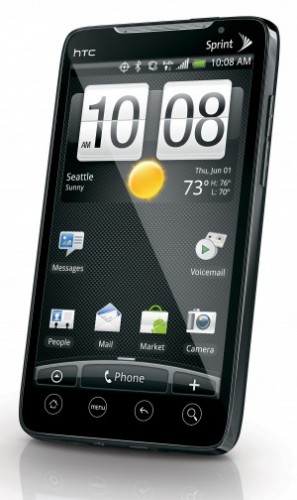 Well, it sounds about right. We have some rumored pricing on the much anticipated Evo 4G, according to a Best Buy Geek Squad representative. The rumored price is the standard $200 on a two-year contract with Sprint.

The Evo 4G is probably one of the highest-spec’d smartphones to ever exist. The new iPhone should surely be able to hold it’s own in some area’s against the Evo, but in some areas it will probably still be lacking. In either case, the Evo is expected to stay in the standard smartphone price range, which is great for Sprint, and potential new smartphone buyers. What’s more interesting is that the Evo and Droid Incredible are squared right against each other. The one thing that could set them apart? Rebates.

If you walk into a Verizon Wireless store expecting to get the Droid Incredible for $200 out the door, think again. As with the Motorola Droid, there is a $100 mail-in rebate. I would not be surprised to see something similar with the Evo. But if you are a smart buyer, you’ll go to Best Buy. Best Buy Mobile usually automates rebates, so you could actually walk out with a Droid Incredible, and hopefully an Evo 4G for $200. I’m not positive on this, but this is what was done with the Motorola Droid, let’s hope for the best for the two upcoming phones! If you don’t care about rebates, then have fun with that, but its easier not having to worry about it.

With the Droid Incredible launch only a couple days away, I bet you may see a price drop right around the mid to end June time period. Even with all the competition coming it’s way, the Evo 4G may still be the smartphone of the Summer. But that’s just out take What is your top pick when it comes to the “Phones of the Summer?”

In a long-ranging interview with The New York Times, Google's VP of engineering and Android godfather, Andy Rubin, talked about...