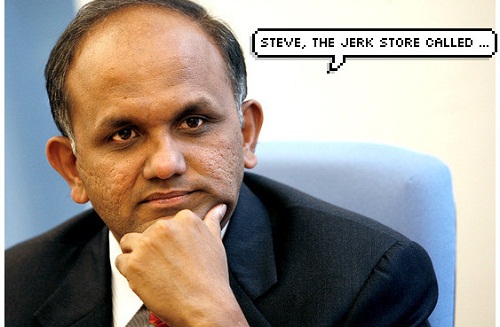 Apple CEO Steve Jobs took his war against Flash to a new level with a letter outlining why this pervasive web technology isn’t allowed on the iPhone OS. Adobe wasn’t going to sit around while all this smack was being talked and its CEO, Shantanu Narayen, had a few choice words in response during an interview with The Wall Street Journal.

If you remember, one of the biggest developmental changes in iPhone OS 4.0 is the banning of non-native iPhone dev tools like Adobe’s Flash-to-iPhone compiler. Adobe’s head said the technology problems in Jobs’ letter are “really a smokescreen” because multiple apps have already been accepted in the App Store without incident. He said that using licensing language to restrict development has “nothing to do with technology.”

Narayen was really flying fast and furiously because Apple was basically claiming anything wrong on a Mac was due to Flash and that proprietary standards aren’t good for the web. Adobe’s CEO said that “for every one of these accusations made there is proprietary lock-in” that doesn’t allow his company to innovate. He also said the Mac crashes with Flash are because of the operating system (or lack of full access it’s granted, I’d guess) than Adobe’s technology.

Narayan also said that he and Jobs have different views of the world because Adobe’s CEO views the world as multi-platform. There are plenty more interesting tidbits in the link below, so check it out when you get a chance.

I completely understand both sides of the arguments and am having a tough time deciding. Say what you will about Apple and its draconian ways, the iPhone OS does deliver an excellent user experience even with (or some say because) of the artificial restrictions imposed. Additionally, Jobs’ assertion that Flash hasn’t been optimized for touch rings true, as well. Adobe needs to really make sure the Android Flash experience is an amazing out-of-the-box experience because this could eventually condition mobile users to expect Flash on handsets.