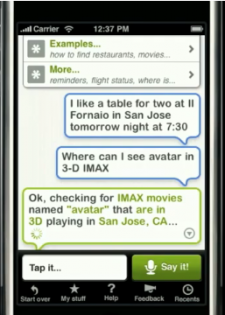 Siri is a voice-powered personal assistant application for the iPhone. The iPhone app’s website describes the app well: You ask. Siri Does. Not to be outdone by other voice-control services on Android, Apple has decided to buy the company, and will integrate Siri into their iPhone OS.

All you need to do with Siri is ask it a question, such as, “Siri, where can I get Dim Sum around here?” Siri will automatically search your surrounding area and reply with ” I’ve found some Dim Sum restaurants a few files from here.” Simple enough yeah? We sure think so.

It is certainly  a good acquisition for Apple, as their arch rival, Android – or more specifically the Nexus One –  has a system wide voice search/ voice to text function. Apple may have introduced their Voice Control in the iPhone OS 3.0, but it’s pretty far behind Google’s implementation of the functionality, and Siri is definitely a big step in the right direction to get back into the game.

Siri integrates a veritable crap-ton of APIs that it uses to come up with your results after asking it a question. From getting a taxi, weather forecast, restaurant, or buying movie tickets, Siri has got you covered. If Siri gets system wide integration on the iPhone, it should certainly give it a leg up. The only question is – how will it be integrated with the iPhone OS. Having a permanent soft key on every screen wouldn’t work. The home button now can only do so much with multi-tasking getting dibs on it. There can only be so many ways to integrate a voice search on a device with one button (for the most part) to control the device.

I wouldn’t be too worried, though. Apple may take forever and a day to actually get Siri’s functionality into the OS, but once they do it’ll be perfectly integrate, and probably insanely intuitive. That’s what you get when your CEO is a control freak (who happens to churn out damn good products).